The One You'll Read 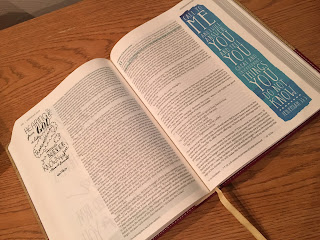 Lately, I have come across a lot of nit-picking of what translation of the Bible is the best one. Some churches insist that the only one to read is the KJV while other’s claim that the ESV is a better translation, still others profess that the NLT is the greatest translation around. I, myself, had read the KJV, NKJV, NIV, NLT, and ESV and I am actually hoping to get the Amplified Bible next (Whenever I finish reading through one translation, I reward myself with a new one)--- but you know what I discovered while reading all of these translations? Every single one of them is flawed in its own way!

The NKJV- This one poses the same issue as the KJV except as some of the errors were presented, they were corrected and updated. However, there is still quite a bit lost due to the fact that it’s still originally translated from the Latin as opposed to the original scriptures.

The NIV- The New International Version was translated from the original Greek, Hebrew, and Aramaic but it too has its flaws. The original version was published in 1978 but was updated in 1984 after discovering some translation errors. The 1984 version was also riddled with error and was updated again in 2011. The main issue with the NIV though is the fact that it was written to be easily read. During the translation process, the scriptures were simplified and dumbed down, therefore a lot was lost in this translation as well.

The NLT- The New Living Translation is a translation based on a paraphrase. Due to this fact, the translation is inherently flawed. According to Craig Bloomberg (one of the NLT reviewers), the Bible was separated into six parts and translated by individuals, then submitted to the editor. The issue with that is there was little to no accountability to the accuracy of the translations.

The ESV- The English Standard Version is a word for word translation from the original Greek and Hebrew texts, and the translations were checked through various sources. However, just because it is a word for word translation does not make it without error. The meanings of words are lost due to the literal translating of the passages. Just as someone saying, “You’re so cool!” in the United States may be misunderstood as “You’re Cold.” by someone who is unfamiliar with American slang, so is the ESV. Some meanings are lost due to the translator’s assumption that every word should be taken as the dictionary definition.
***
Keep in mind, these are only the versions I have read. Of them, I do have my personal favorites. I love the NKJV and the NIV. I understand their inaccuracies and I do not live with my head in the sand about them. I know that the only copy of the Bible that is without error is the original. Someday, I would love to learn Greek and Hebrew so that I can better understand what the scriptures say.
The issue I am having, however, is the fact that one section of the church is screaming that the translation that they use is perfect while all others are flawed, and the rest of the church is screaming back that theirs is the one flawed and the translation they use is the perfect one. For one thing, people, the Bible was written by people. It is God’s inspired word, but it was written by people… and translated from the original text by people. To me, it is a beautiful example how even in our imperfections, God’s perfection shines through.


Think of it this way, you’re playing in your room as a child and your older sibling comes in and says, “Mom said to clean your room.” If you’re not wanting to get into trouble, you’re going to clean your room and not say that just because your mom did not audibly tell you, it does not matter. You’re also not going to scream that it is the wrong sibling who is telling you that your mom said to clean your room. Likewise. The Bible was written by people who were inspired by God and we should not be freaking out that King James is not the one telling everyone what God said.

You want to know what translation of the Bible is best? It's the one you'll read!
at February 09, 2018

This year has been a trying one, to say the least. Between Jason's roles as Senior Pastor AND District NYI president, we have not been w...