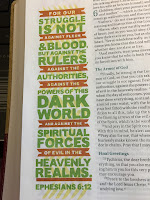 My husband was recently contacted by a fellow pastor on a popular networking site. This pastor told my husband that he believed that the KJV Bible was the only Bible that was able to be used by God and that if my husband did not agree, he was wrong, and was a heretic.

A friend of mine who is a co-pastor with her husband, was approached by a woman on Facebook who told her that it is against the word of God for a woman to be a pastor to anyone other than women or children (never mind the various women that God used to minister to men throughout the Bible). This woman cited two verses which she felt made her point but ignored the cultural context of those verses and said that any woman who preaches goes against God.

Another situation occurred when a pastor’s wife with whom I am acquainted reached out because she is dealing with Postpartum Depression. Rather than sharing love, another pastor’s wife told her that depression is “all in your head”. That it’s not real and a "good Christian" will just let the bad feelings go.

“Don’t have anything to do with foolish and stupid arguments, because you know they produce quarrels. And the Lord’s servant must not be quarrelsome but must be kind to everyone, able to teach and not resentful.”
2 Timothy 2:23-24 (NIV)

The Church is divided!

It is no wonder that the world looks at the church with distaste when we’re over here arguing about what translation of the Bible is best.

It is no wonder that the world avoids the church when the church preaches unity but can’t even love other members of the church.

It is no wonder that the world despises the church when the church brushes off depression as something that just needs to be “let go” and does not see it for the real problem it is.

It is no wonder that the world hates the church when the church decides to fight over stupid things but when it comes to major problems, the church buries it’s face in the sand.

“But you, man of God, flee from all this, and pursue righteousness, godliness, faith, love, endurance and gentleness. Fight the good fight of faith. Take hold of the eternal life to which you were called when you made your good confession in the presence of many witnesses.”
1 Timothy 6:11-12

Instead of fighting over petty things -- like what translation to use, if women should be in ministry, or living with our heads in the sand when it comes to the real issue of depression -- we need to be fighting the “good fight of faith”. What is the “good fight of faith”?
Ephesians 6:12 says “For our struggle is not against flesh and blood, but against the rulers, against the authorities, against the powers of this dark world and against the spiritual forces of evil in the heavenly realms.” Our fight is not against people! Later in the passage, it says, “And pray in the spirit on all occasions with all kinds of prayers and requests. With this in mind, be alert and always keep on praying for the Lord’s people.” (v.18) How do we fight? We are to be alert and always praying! Instead of shoving our heads in the sand when there is an issue going on in the world, we need to be aware of it and praying against the devil’s ability to use it! Instead of telling people in the church that they’re reading the wrong Bible, or they should not be ministering, or they need to let the bad feelings go—We need to be praying for them! Instead of fighting amongst ourselves, we need to be gathered together in prayer – praying for each other and praying for our world!

The church is so busy fighting the WRONG fight, we have forgotten to fight the GOOD fight! Let’s get our focus back on what it should be!